"That feeling of peer teamwork when you're starting your career and building your skill set at Oliver Wyman is unmatchable I think..."

Tell us a little bit about yourself and your career path since you left Oliver Wyman?

I left OW in 1999, did a Masters in economics at LSE, then by chance joined the Lord Chancellor's Department as an economist on a temporary contract for a year, working on competition issues and trade promotion. And I never left the public sector. I became Principal Private Secretary in the Ministry of Justice in 2006, then spent a few years in the Foreign Office and the Cabinet Office, before becoming Director General Criminal Justice in 2011. I was working for the Prime Minister as Director General Economic and Domestic Affairs over the 2015 election, and then moved out to the States with my husband, John Romeo, and kids in 2016. Now I'm Her Majesty's Consul General in New York, and Director General Economic and Commercial Affairs USA.

What does the role of Consul General in New York do?

As Consul General, my job is to promote the UK’s economic profile, foreign policy, and national security priorities in the Tri-State area. As Director-General Economic and Commercial Affairs USA, I direct the business and prosperity work of the UK Government across the United States, including oversight of the North American operations of the foreign commercial arm of the UK Government. I'm also the government's Special Envoy to the US technology companies.

What does a typical day look like for you?  What do you most look forward to?

Its a bit early to know what a typical day looks like since I'm only on day 7! Thus far the main theme has been the varied nature of the job: On my first day in post last Monday I hosted the then Chancellor of the Exchequer on a visit from the UK, and we met several Wall Street Global Chief Execs to discuss investment in the UK post-Brexit; in the afternoon I met a series of tech entrepreneurs to discuss innovation, and was shadowed by the New Yorker; and in the evening I hosted an event with Meryl Streep and Hugh Grant to screen their new film.  Next week I'll start the week in LA meeting tech firms, then to the Democratic National Convention in Philly. So nothing seems typical yet!

What skills did you acquire at Oliver Wyman that have helped you throughout your career?

Obsession with rigorous analysis and an evidence base. Importance of a deadline, understanding the critical path, and prioritisation. Dealing with senior people and building a reputation and credibility which underpins long term relationships.

What has been the hardest professional decision you've made?

Leaving my job working for the Prime Minister on Economic and Domestic Affairs, and moving to the States with my family, was probably the toughest. But my husband John had accepted a role running the North America business for OW and we knew we wanted to keep the family together and that some time in the States would be an amazing opportunity for the kids. I was lucky the British Government were so supportive in suggesting opportunities for me to stay working for the Government out here - my initial thought was I'd need to get a secondment to the private sector. But being Consul General in New York is a dream job, so it's all worked out brilliantly.

You run the economic, trade and investment relationship with the US for the British government. How has your job been affected by Brexit?

It's got much bigger! Since my job is to promote Britain to the US and I'm responsible for inward investment from the US to the UK, I'm now spending a lot of my time talking to senior executives in the biggest US companies to deliver the governments message that the UK is very much open for business, highly competitive, with a favorable tax and labour regime and rule of law.

What professional accomplishments make you the most proud?

Delivering the 2 1/2 year, £1bn programme to reduce reoffending among ex-offenders, as Director General of Criminal Justice at the Ministry of Justice, would be right up there. Running the Economic and Domestic Affairs Secretariat in the Cabinet Office over the 2015 election was also brilliant.

What do you miss most about being at Oliver Wyman?

I made some great friends working late nights on some big financial services projects - we would finish work at 9 or later, then go for drinks in canary wharf. That feeling of peer teamwork when you're starting your career and building your skill set at OW is unmatchable I think.

What do you do when you’re not working?

The line between work and home is quite blurred in this job because the job involves so many things I love to do in the evenings (theatre, film, galleries..) and in New York there is always a fabulous event to be at. When not working I'm with my kids - John and I spend the weekends sherpa-ing them to their various activities - soccer, drama, orchestra etc. When we moved here my plan was to do a touristic activity every weekend but there hasn't been the time - next on the list is Liberty island.

What are you reading?

Ben Horowitz 'The hard thing about hard things'. And just finished 'Everything I never told you' by Celeste Ng. 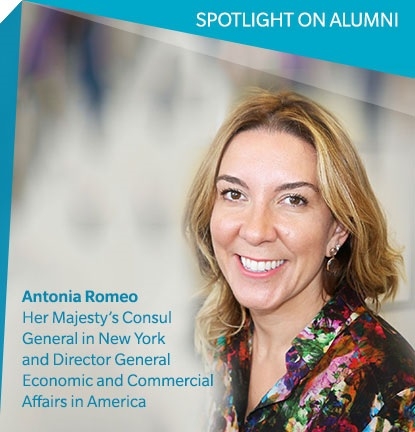