Recently, many in the industry have become worried that the traditional orchestra subscription model might be reaching the end of its life. But the question remained: Does this anxiety accurately reflect what is really happening in the orchestra world and, if so, what can be done about it? In this climate, the League of American Orchestras approached Oliver Wyman to discuss performing a pro bono study to look at the challenges facing the traditional subscription model.

As with the 2007 research, our approach to this new topic was very data-driven. Oliver Wyman analysed transaction level data spanning the past decade, covering millions of audience members from more than 45 orchestras across the United States (which we believe to be the most comprehensive dataset ever assembled to study the behaviour of orchestra audiences in the US). We also conducted a survey of over 4,000 concertgoers to better understand their references and drivers of satisfaction, and tested our results in a market simulation of more than 10,000 purchasing decisions.

Each orchestra’s situation is unique. As such, our aim was to present a general overview of the sector, from which individual organisations can then draw their own conclusions and develop programmes that will work for their institutions.

Our findings were unequivocal: The orchestra subscription model is not obsolete, but it does need to adapt in order to tap into the full audience potential and ensure a healthy financial future for orchestras in the United States. Our research showed that orchestras should consider moving away from a transactional mentality and start to build closer, “stickier,” and more two-way relationships with their audience members. Moreover, orchestras could potentially increase their revenues by decoupling the size of subscription packages from their customisability, to capture the latent demand in the marketplace for small, curated subscriptions as well as large, customised options. Orchestras might also benefit from implementing innovative membership programmes that confer exclusivity and additional benefits, such as those offered by American Express and Starwood Hotels and Resorts. 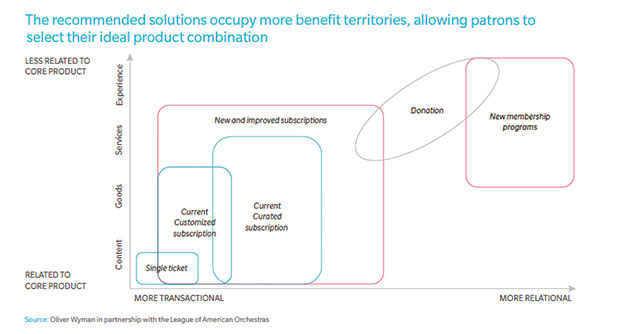 Our buying simulations suggest that improved subscription products could grow the audience base for classical music by 20 percent and increase revenue by substantially more. The effect for each orchestra will vary not only depending on how much change they are able to implement but also due to their unique situation, and we hope that America’s orchestras can use our recommendations to develop robust and sustainable business models that allow them to continue to play some of the world’s greatest music to the largest possible audiences.

Over the last few years there has been no shortage of concern within the US symphony orchestra community regarding their economics. The cost of putting on an orchestral concert continues to rise, yet ticket sales volumes have been declining and subscription revenues – historically the keystone of ticket sales – have been dropping even quicker.