In 1998, Microsoft executive John Wood went hiking through Nepal seeking serenity. Instead, he met a man with a problem: the headmaster of a rural school that had 500 kids who wanted to read – but no children’s books. Wood organized a book drive and, working with Nepali Dinesh Shrestha, delivered 3,000 books to several schools. Room to Read was born. Erin Ganju, a Silicon Valley executive formerly with Goldman Sachs and Unilever, joined as a third co-founder and is now CEO. As Room to Read neared the end of its first decade in 2008, its leaders began considering how they would sustain the nonprofit’s momentum and extend its achievements and impact.

Enter Dave Monk, a NERA vice president who represents the practice group on the Oliver Wyman Group Pro Bono Committee. He proposed Room to Read for a pro bono project. And the rest is history.

Oliver Wyman led an intensive three-month process to reassess Room to Read’s mission and vision, clarify its goals and outcomes, and strategically align its programs.

Oliver Wyman applied its Value-Driven Business Design methodology which included conducting a rigorous competitive assessment, collecting stakeholder feedback, identifying and articulating strategic choice points, evaluating the risks and rewards of each option, and then designing and facilitating key discussions with the management team. 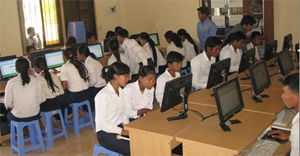 As we continue to scale Room to Read, I think everybody in your company can be proud that they’ve played a role in this. A huge role.

Where is he now?

Dave Monk serves on Room to Read’s Advisory Board and is talking with the nonprofit about a possible next project. Just in time to help Room to Read achieve its next goal: helping 10 million children by 2015. 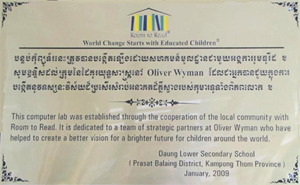 On a plaque posted in the Lower Secondary School in Daung, Cambodia, Room to Read offers a thank-you to Oliver Wyman Group for the efforts of a consulting team.