Airplanes Will Fly on Weeds and Waste Sooner than You Think

Will the aviation industry soon feel the winds of change when it comes to fuel? Ground transportation is transitioning to lower-emission fuels such as natural gas and electricity. But nearly all airplanes still run on petroleum-based jet fuel, due to a lack of commercial options. Many hands are at work on this pressing issue: Airlines, original equipment manufacturers, fuel suppliers, airports, government agencies and researchers are coming together in working groups and coalitions with exotic monikers like SAFUG, CAAFI, MASBI and SAFN to develop options that may finally enable the industry to move beyond its current predicament.

Airlines know that alternative fuels are essential for the industry’s long-term viability. Presently, they are at the mercy of rising and volatile petroleum prices, spending as much as 40 percent of their annual budget on fuel. In addition, the industry will need to ramp up reductions of greenhouse gas emissions and pollution in response to regulatory pressures, given that the European Union has added domestic aviation to its Emissions Trading Scheme and the United Nation’s International Civil Aviation Organization has set a goal of carbon-neutral growth for international aviation from 2020 on. Importantly, without alternative fuels, both fuel budgets and emissions will continue to rise, given that aviation transport demand is projected to double in the next 20 years.

Disruptive TechnologiesIncreased focus and higher levels of government and private investment in fuel research and development in recent years are bearing some fruit: Two technologies that have been approved to produce fuels that can be blended with petroleum for use in flight rely on hydroprocessed esters and fatty acids (HEFA) and Fischer‑Tropsch processes. Some 1,500 commercial flights have been flown using such blended fuels, and airlines such as KLM, United and Alaska Airlines have made multiyear commitments to buy biomass‑based fuels.

We doubt the industry will switch to one, breakthrough alternative. Instead, after careful review of fuels in development, and based on our work with airlines, original equipment manufacturers and suppliers, Oliver Wyman expects several alternative fuels could prove to be feasible in the next few decades. (See Exhibit 1.) 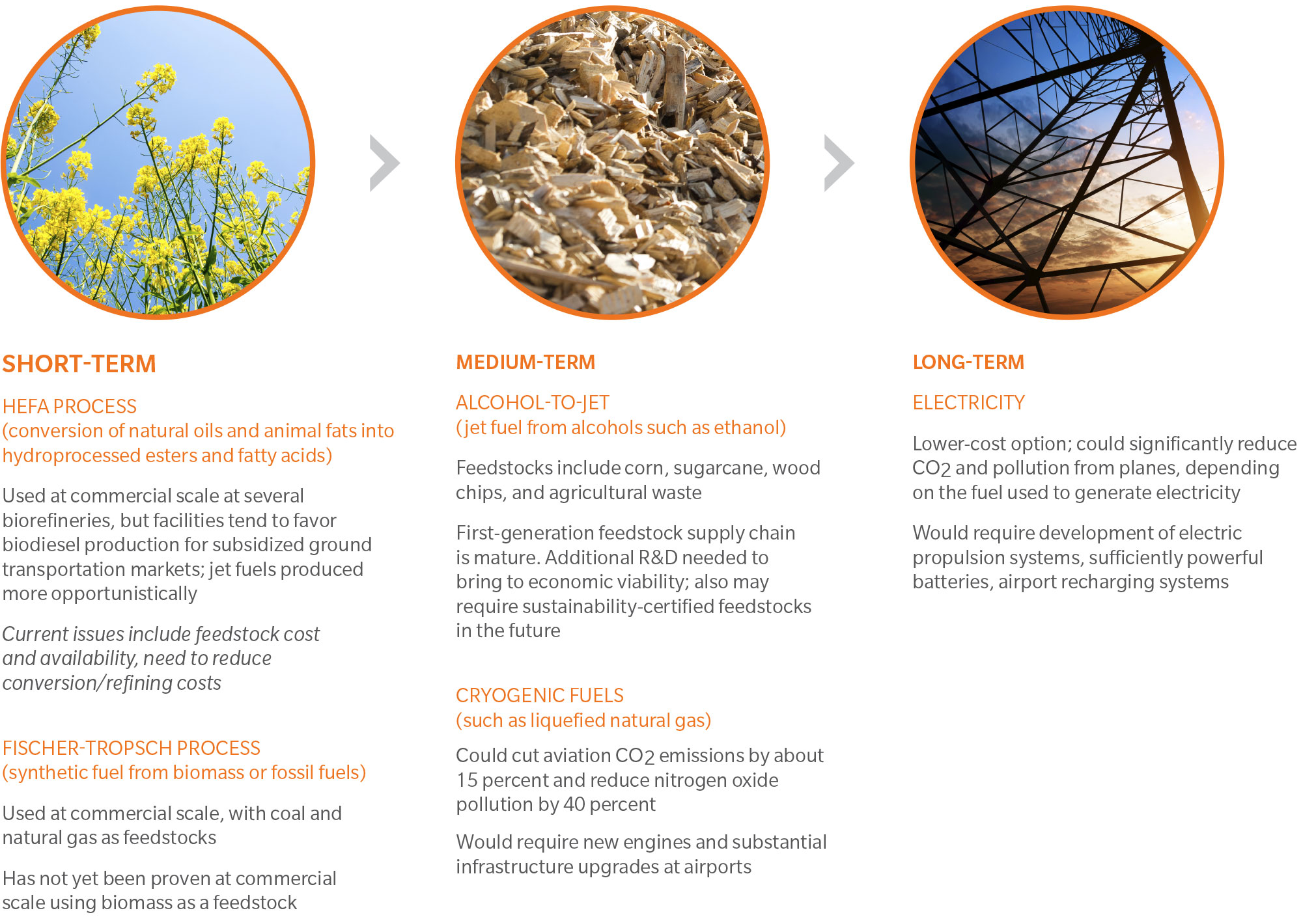 In the short term, HEFA and Fischer-Tropsch processes that convert biomass into fuel have potential, as their outputs have been certified by ASTM International. While both technologies face significant economic hurdles, large subsidies in developed markets are likely to remain in place for as long as five years, which will allow these processes to become economical. In addition, both are already currently producing small (but larger than pilot) levels of fuel for discrete offtake agreements.

While fuels produced from both HEFA and Fischer-Tropsch processes currently have a competitive advantage due to technology maturity and established government subsidies, both face scaling challenges. Key hurdles for converting oils and fats are feedstock cost and availability, in large part due to land competition with food crops and competition between jet biofuel and other oil uses (such as in feed for cattle production). Research is ongoing on more sustainable feedstocks, such as those that could use brownfields or waste land, as well as algae as a feedstock. But economical scalability is a long way off. A sustainable Fischer-Tropsch process can use plant waste, but faces challenging economics due to the high capital costs and large project sizes required to generate economies of scale.

In the medium term, we believe alcohol-to-jet technologies could have potential, due to the low cost and high availability of feedstocks. Alcohol-to-jet fuel could use sustainable energy crops such as miscanthus and switchgrass, low-cost agricultural and forest waste, and municipal solid waste. Prices for cellulosic feedstocks such as forest waste are not correlated to food since they are not tied to existing farmland.

In addition, the aggregate volume of feedstock is much larger and presents a greater opportunity to create meaningful quantities of fuel. Alcohol-to-jet fuel is expected to be certified for use in aircraft by ASTM in 2014, according to the International Air Transport Association. Traditionally, however, alcohol (in the form of ethanol) has been more valuable to blend into gasoline than to convert to jet fuel. The use of cellulosic waste for alcohol-to-jet fuel also faces technological and economic hurdles that will need to be solved.

Longer term, technologies such as alcohol-tojet and pyrolysis may also provide impactful quantities of economically priced fuel. “Third generation” algae fuel and electricity could be viable future options as well. But based on what is known today, those listed are likely to be the most viable options.

The industry will need new planes and engines to accommodate some alternative fuels, as well as changes to fueling infrastructure. Developing these fuels, however, is a question of “when, not if” to ensure the long-term health of the aviation industry.


by: GEOFF MURRAY and ERIC NELSEN